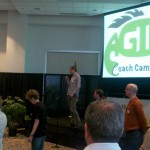 I tend to write blog posts that are too long.  Which is why sometimes I don’t blog as often as I should.

But I really want to share everything with you that I learned at Agile Coach Camp US (#ACCUS) in Columbus Ohio last week.

So instead of a long blog post that I feel obligated to make perfect, I’m going to “blog tweet” a bunch of short thoughts…

Thanks first go to @Paul_Boos and the rest of the volunteers.  You did an incredible job – thanks for making it possible!

Friday AM was @TobiasMayer leading the keynote games.  “Failure Bows” were a big hit, and lasted through the weekend.

Failure bow: stick your hands high up in the air, wear stupid grin, and say something like “I failed!  This is a learning opportunity!”

He had all us walk around the room in that pose, greeting people.  Very funny.

Ideas for helping 50+ ppl projects from a @MichaelSahota session

He also led a swarming exercise to show how groups band together.  It was fun, but didn’t work as he expected.

So I love how @TobiasMayer took a “failure bow” himself and proposed an open space session for Saturday to try other ideas with this game.

@TobiasMayer also led “friends and enemies” exercise. Pick an enemy across the room, and keep a friend between you equidistant.  Hard to do!

Showed how it’s easier to coordinate large groups when we treat each other as colleagues than jockeying for political positions.

I had the pleasure of walking back to the hotel with @TobiasMayer once, and it was great to get to know him IRL.

@MichaelSahota led a coaching skills workshop where I met @DaveSharrock and @IndyAgilista and we formed a coaching team.

We rotated roles between coach, client, and observer, and coached each other thru real problems.

Very revealing for me.  It was a great chance for me to practice the “powerful questions” I’ve been learning from @MichaelSpayd

I realized doing this I was a better coach in that session than I have been with real clients.  I was less afraid. (virtual failure bow!)

A game of Failure Pattern Poker

Now I am giving myself permission to fail more (virtual failure bow!) and take more risks with my questions.

The best questions I can ask are those that question the client’s assumptions as well as my own assumptions/fears about what can be done.

“Describe to me what it would look like if you could solve this problem.”

@DaveSharrock and @IndyAgilista were great and I’m grateful to have made their friendship at #ACCUS.

@MHSutton led a very fun improv session. He delivered side splitting laughter as promised.  I felt like I was on “Whose Line is it anyways?”

@MHSutton had us do actual improv skits to loosen up and for team building.  Note to self: Bippitby Bippitby Bop! I was “garbage truck man.”

I brought “Dr Swiffer Wiper” into the game.  Best I could come up with, but it seemed to work!

In the PM, I led a session on failure pattern poker.  Very grateful to the people who joined in and we had two great tables going.

@GDinwiddie, @Paul_Boos, @S2IL, & others had gr8 ideas for game revisions, depending on its use for training or retrospectives. Thank you! 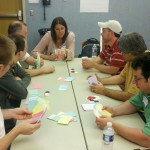 It was very fun and I hope to improve on it for future use.

I also attended some great open space sessions that gave me many good ideas.

@S2IL led an interesting discussion on the Half Arsed Agile Manifesto. How can we use sarcasm and humor with our clients?

I think the answer was carefully, and with their permission, but it’s a valuable way to mirror back behaviors to clients.

Just going over the Half Arsed Agile Manifesto created a lot of great discussion.

Also had an interesting discussion with @GerryKirk & others from smaller cities.  We discussed how to build agile communities.

Charlottesville already has an impressive per-capita agile group in AgileCville, thanks to the efforts of many excellent folks. 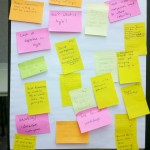 Gave me ideas for inexpensive one-day agile conf or pay as you can training. Perhaps get several biz’s to jointly bring in CSM training?

I had lunch at a table with @OlafLewitz who told me how we should stop talking about projects, and focus on product dev instead. Loved it.

The side conversations with @AgileToolkit, @DavidBulkin and others were always fun and fruitful.  It was great to see everyone.

The beers at night, networking, and discussions were also very valuable.  I wish I had everyone’s twitter name to thank for the good times.

@DerekWWade was hilarious marveling over Murphy’s waitress’s triple major at OSU and twitter. Didn’t write her twitter down or I’d shoutout.

Still waiting for people to start the tag #ShitThatAngelineSays after many funny talks with @AgileMeister. Scared to start it myself.

And of course there were quite a few hilarious conversations that I’m not going to be the first one to tweet about.

In one last tweet, what did I learn at #ACCUS?

As an agile coach, you sometimes feel alone at the client.

Shouting into the storm, and bummed that people are slow to join you, even after you show them there is a better way to do things.

Agile coaches all face similar challenges and fears.  Facing them and questioning them for ourselves and our clients is how we bring value.