What’s the best conference that you’ve ever been to? For me, the 2012 Lean Startup Conference in San Francisco is definitely the best one that I’ve been to so far. It was my favorite as a speaker, where I did a short Ignite talk on deploying software more frequently. But it was also my favorite as an attendee.

The Sunday night Ignite talks and the Monday talks were all great. Despite the fact that I’ve read all the major Lean Startup related books, I gained a lot of depth in my knowledge, I gained inspiration, and I came away with practical advice from the speakers. 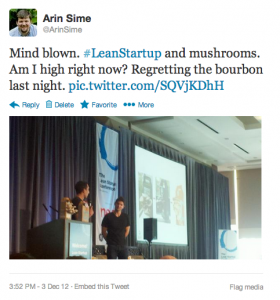 I feel like I could write a full blog post on each speaker, but instead I’m going to give you the six biggest take aways I had from the Lean Startup Conference.

1. Lean Startup is for more than software

I come to the Lean Startup world from Agile software development methodologies like Scrum and Kanban. So I inherently get how this can apply to web and mobile businesses like we work with at AgilityFeat. But there were speakers talking about how they applied the same concepts in federal government, architecture and hospital design, vehicle design, helping farmers in India, porta potties in Africa, and even growing mushrooms.

By the time we got to the speakers who started growing mushrooms, and now are also building hyrdoponic fish tanks, my mind was just blown.

2. Be prepared for future stupidity

Dan Milstein described a lean startup process as planning for a future in which we are all as stupid as we are today. He made a great point that we are fooling ourselves if we think that because we learned some lessons from our last failure, that means we won’t make more mistakes in the future.

We will make mistakes in the future, and so our process should be based on calling out and validating our assumptions. Dan had many other great points, including that no every problem is a “there’s an ax murderer in our office” type of problem, and small failures on the way to success are a good thing.

Steph Hay gave a great talk about how important it is to talk to your customers in simple terms that they understand and which appeal to them. Cut out the crap (ie, all the marketing jargon).

I would say more … but I think Steph would recommend I should say less.

There were several sessions, including my own ignite talk, that emphasized the importance of delivering code quickly. There is a common problem with certain types of developers that they never want to say something is “done”. They want it to be fully featured, and to be absolutely bug-free. They are overly afraid of releasing something with a minor bug. An efficient business will need to strike a balance and still make a profit.

Once again, Dan Mil probably said it best: “There are two types of startups … Those successful and a little ashamed of their code, and those who are out of business.”

5. You can iterate on mobile applications

I don’t know about you, but on my android phone I’m always getting updates to my apps. It’s almost annoying. So I know you can deploy bug fixes to mobile devices a lot. That’s a form of iterative development, but lean startup methodologies is about more than that. It’s about iterating on your business model.

Matt Brezina showed me that it is possible to iterate the business model for apps. He deploys lower quality versions of apps to test ideas and concepts. Only if it appears to have traction will his teams then build a better version of the app. The better version gets a better name and completely different branding, so that the uglier developer-driven design of the first version doesn’t hurt the brand of the new and improved app. The key thing here is at a certain point you have to be willing to kill off (and stop supporting) those first iteration “off brand” apps that were really just a test.

6. Are you starting a hobby or a business?

This talk really hit home. At what point do you decide that a business is just a hobby? When do you decide that it’s been fun (or not), but you’re never going to make money on this and you need to just shut it down. I know from past projects that is a very hard decision to make. Your pride gets in the way. Wouldn’t it be great to avoid that at the very beginning of your project?

That’s what Crowdtesting may do for you. Justin Wilcox talked about doing a combination of crowdfunding and a/b testing to see if someone will prepay for your product at a discount. The data you gather from that will help you determine if you have a viable product or not. The idea is fascinating to me and you should go read more on this topic.

To wrap up, I’ll throw in one more bonus piece of advice that multiple speakers said. Don’t read Eric’s book and then go into the office on Monday with a list of all the things that you are going to change right away. All process changes require iteration, but it is well worth your time to keep trying more and more bits of the lean startup methodology.