A Minimal Viable Product to Make the World a Nicer Place

Abraham Lincoln once wrote, “everybody likes a compliment”. We couldn’t agree any more with ol’ honest Abe so when our friend Steph Hay approached us with her app idea to make the world a little nicer, one tweet at a time, we jumped at the opportunity. The application is as simple as it is glorious. It collects and organizes twitter compliments tagged with #1nicething by a person’s twitter handle. The compliments get digitally recorded so that you can revisit the compliments you’ve received and given to others, which not only makes us feel better, it can actually improve performance.

We sat down with Steph to talk about building the MVP and doing Customer Development for 1NiceThing.

Cue and Eh with Steph Hay

Me: Tell me what 1NiceThing is all about.

Steph: Capturing the nice things people say about you — and that you say about people — in a place you can check out whenever you’re feeling down. Just as a reminder that, even when stuff feels cruddy, you’re loved and you love, too.

Me: How did you come up with 1NiceThing?

Steph: I saw all the “Happy Birthday!” notes on Facebook, and I thought, “Hey, wouldn’t it be nice if more days felt like my birthday — especially the days I feel sad?” So a year later, I put a hacky Google form on my Facebook wall on my birthday, and it asked explicitly “This is my self-absorbed request to see if you’ll say something nice about me.” To my amazement, almost 70 people did it. Bananas. So I knew something was there, especially when people left comments like “I wish I was brave enough to ask for this on my birthday, it’s great!”

Plus, some of the nice things were from people who shared things about me I’d forgotten–experiences I didn’t realize had an impact on them–and it moved me to tears (of joy). I wanted other people to feel that way.

Me: How does it work and why should people use it?

Steph: Tweet #1nicething about someone. We’ll save that content to a page, respond immediately on Twitter with a link, and then you can refer to that page whenever you’re feeling blue–or just want a reminder of all the nice things you’ve said about people AND the things they’ve said about you, too.

People should use it if they want to say #1nicething about someone; and why not? Doesn’t the world deserve a bit of love every day?

Me: What is different about a digital compliment versus a non-digital one?

Also, staying power. The non-digital compliment stays in my memory, and I try so hard to hold onto it, and to pull it back up in the moments life’s got me down, but #1nicething keeps ’em in a place that’s mine, as a support system to my brain.

Me: Prior to building the application, what did you do to test the idea?

Steph: That Google form, whoo-boy it was a hack. But it worked. To my amazement, it worked. 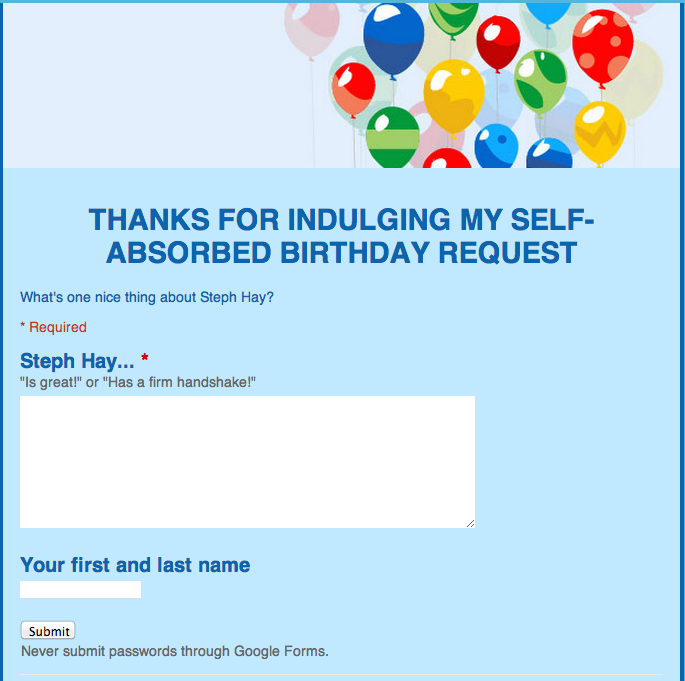 Me: What have you learned so far from launching the application?

Steph: Well, first we designed it to verify the person’s identity on Twitter BEFORE showing them their page. That turned out to be a hurdle most people wouldn’t get over; they didn’t want to log in via Twitter without seeing the results. (It was an “oh-duh” moment as I saw people during testing stop there almost every single time, even though during the prototyping process it seemed like the safe way to validate a person’s identity).

So we moved that validation step to the moment when you’d actually need it — “I want to sign in so I can manage this page/hide things/get notifications” kind of action. Rather than the “I want to see what this is about” moment.

I’ve also learned that people will favorite my #1nicething tweets about other people–a sign that YES, in fact, this is a nice thing I concur with! Hilarious, and proves people “love to love.”

Me: What’s next for the application?

Steph: It depends; will you use it to say #1nicething? Will it just be me and Ford? Well, let’s hope it’s the former, in which case, there’s no limit to love.