Inside the creation of the Tougher.Me MVP

For the past two months I’ve had the pleasure of working with incredible Steph Hay on the development of her application, Tougher.Me. Tougher.Me is Steph’s first web product and we asked her to share some of her experiences talking to customers and creating Tougher.me. Here’s what she had to say;

Strength and fitness profiles for people who do CrossFit.

How did you come up with the idea?

I wanted a place for my “CrossFit life,” so to speak. Somewhere I could record my strength maxes, compare my own fitness to other women who are about my size and experience level, post pictures of me looking tough :), and be able to see faces of teammates in my gym — whether as a reminder of their names (hey, we have 150 members!) or just to leave them a “way to go!” comment when I know they just achieved some new goal.
Facebook, Twitter, and LinkedIn don’t serve these purposes for me since they all encompass different aspects of my life (personal, work), and they’re fleeting. But neither do proprietary/closed WOD-tracking platforms meant for CrossFit-strength tracking. I wanted something more open, accessible, and UX-friendly that I could pull up on my phone and not have to sign into in order to see my teammates’ faces.

What sort of customer discovery did you do before deciding to build the product?

I talked to three gym owners and learned about what they liked/didn’t like about existing CrossFit-community-specific tools. I asked 10 other CrossFitters what they liked/didn’t like about Facebook or WOD-trackers as places for tracking their CrossFit life. What I learned was that no tool seems to work well in solving any of these problems; almost everyone still kept track of their progress on physical whiteboards in gyms or personal notebooks. Some of them use Facebook to tout their strengths. Two of those CrossFit 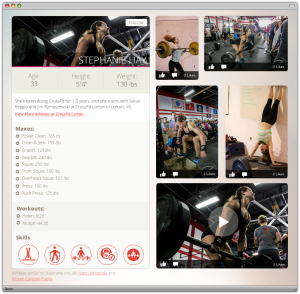 ters had switched from one gym to another, and they “lost” their record-keeping because the proprietary tracking systems wouldn’t let them port their data to a new gym. Bananas.
So the reality is I could have talked to tons more people if I was dogmatically Lean, but I didn’t; I wanted to build something that met my needs, then learn if it meets anyone else’s.

How did you decide which features to include in your MVP?

The #1 test for the MVP is “will people enter content into yet another thing.” That’s what I’m in now. So I focused mainly on features that could be integrated in the sign-up process itself when answering that question. Basic info and skills achieved are part of the sign-up process. Uploading photos of themselves and completing maxes and personal achievements are three features that users are prompted to complete after the sign-up process, so now I’m watching how many users actually take that step, too.

What have been the biggest surprises for you in building the application? 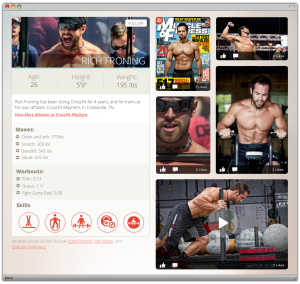 Two main themes to my experience so far (not necessarily surprises) — One is that I may have built an MVP for myself that no one else wants or sees value in. I have to strike a balance between customer development and iteration to actually find if it *is* an MVP — the viable part, I mean — while keeping in mind that Tougher.Me might be completely worthless to everyone other than me.
The second is that during customer discovery, I’ve heard a few things that work against what I’d initially envisioned for the app — namely that some people want to have a private profile. This makes sense to me; now I have to decide whether these kinds of things are worth building to try and find out if this makes the product “viable” or if they’re just features. Ultimately, my metric is usage — how often do people come back to update their profiles or take some action? It’s still very fuzzy what the exact path will be toward answering that question.

What advice do you have for entrepreneurs with a web application idea?

I’d refer them to you guys! Seriously, the workshop brainstorming session that I did with your team last fall made all the difference in helping me think through “next steps” for the many ideas I had. It was your team who helped me think objectively about what customer development would look like, how an MVP could come together, and what sort of data I could gather for each of the ideas I proposed. Tougher.Me came out as the clear winner since I’m part of the audience, have easy access to do customer development, and could get a prototype up-and-running within 2 months. It’s crazy to think I’m at the precipice of now testing all these assumptions I’ve been making. It’s been a huge learning experience, and I would tell any entrepreneur that “finding your dream team” is priceless. For me — so far :), — that’s Agility Feat.