As a friend of mine likes to say, music and technology are the two coolest industries on the planet. Last month, I went to my first Music/Tech meetup in Boston where I met the organizer, David Blutenthal. David and I got to talking and I learned about the kick-ass project he’s been working on, Moodsnap. It’s a fascinating piece of technology that combines the emotional responses that come from seeing and hearing, with crowd sourced curation into a “can’t stop using this” application. It will change the way you listen to, er, experience music. I wanted to know more about Moodsnap and how it came to be and David graciously agreed to share the Moodsnap story below via some Q & A. 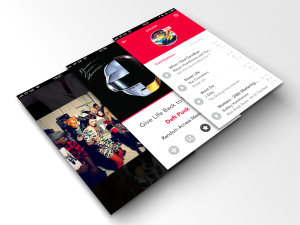 Moodsnap ™ is the world’s first Image-Based Music Streaming app, delivering contextually relevant music mapped to personal taste. Powered by Spotify and free for Spotify Premium subscribers, Moodsnap categorizes music stations by emotive photographs, allowing users to choose music simply by tapping an image that best relates to how they feel. By displaying a spectrum of life’s emotions not in words, but in photographs, it allows users to FEEL what they want to hear, rather than search through exhaustive and often un-relatable text-based categories.
Compared to other music consumption apps, ones based purely on algorithm-generated playlists do not necessarily meet the expectations of every listener and lack that magic human connection. On the other hand, purely user-generated content ignores the subjectivity of personal taste, resulting in too much time spent hunting for needles in the haystack.

Moodsnap ™ aims to deliver a hybrid solution, differentiating itself in the following key ways:

1. The user community collaboratively curates the music stations. Like a free association exercise, users look at photographs that the app provides, and contribute songs that feel right for each image. Rather than a listener selecting a station titled “love songs,” he or she might tap a photograph of a flirty, playful couple in a park on a sunny day, or perhaps a more intimate couple snuggling up on the couch. Both elicit thoughts of love songs, but very different ones.

2. Each user’s experience is mapped to his or her individual taste. By telling the app that a certain song does not fit their taste, or conversely, does not fit the Moodsnap station (i.e. photograph), the user not only improves the app’s understanding of his or her musical interests, but also the quality of the station for the community at large. In effect, the simple rules that govern the system create a dynamic, self-regulating experience for everyone – comparable to other user-generated platforms such as Wikipedia, Waze, and Rap Genius.

3. Users benefit from flexibility and control: No song skip limits, change the energy level within a mood with a swipe of a finger, and favorite songs for later listening on demand in Moodsnap or Spotify ®.

In essence, Moodsnap is designed to serve two types of people – the lean-back listener who wants to quickly find contextually relevant music that matches their taste, and the lean-forward listener, who enjoys knowing their great taste is adding value to the community in real-time.

That word community is important because Moodsnap is just that – a community. Without our users there would be no Moodsnap. The reason our music is co-curated by our users rather than a select number of “music experts”, is because we believe there’s a ton of people out there with musical expertise, and everyone should have a simple, easy-to-use platform to contribute that knowledge to benefit others’ musical enjoyment. Rather than needing to arduously create a full playlist of 20+ songs, Moodsnap gives everyone the tools to contribute even just one song that they love in a certain context. Users then get to enjoy listening to those songs, each having a say in whether or not they belong in the respective stations.

What inspired you to build Moodsnap?

I’ve always been inspired by music’s unique and innate ability to amplify our lives. It’s always been that constant in my life that I use as a tool to navigate how I feel, or how I want to feel. I believe in music’s singular ability to augment the present moment, make it feel authentic and vibrant, and make us feel more connected. My team and I were inspired to capture those very human musical attributes in order to deliver a listening experience that makes the user feel known and understood. What’s missing from today’s music apps is the perfect balance of contextual relevance, trusted curation, and simplicity through intuitive design. Moodsnap delivers on all three.
We first built a very basic MVP, that essentially was a Google Doc with a bunch of photographs, displaying common themes such as friends huddled around a beach bonfire, or an emotionally charged photo of a romantic couple arguing. We then asked friends and trusted acquaintances to pick any two photos, and assign 5 songs to each that they feel fit the specific mood of those photos. The process is basically a free association exercise that taps into the evocative power of images and your own past experiences with music.
After getting an overwhelmingly positive response, we gave ourselves the green light to move forward and build the first functional mobile prototype.

How did the idea evolve over time?

Like many startups, where we are at today is quite different than where we began. The lightning bolt idea that morphed into Moodsnap was a result of applying “Lean” or “Agile” development philosophies to our product development.
The original intent was actually to build a music dating app, or more broadly, offering “social discovery through music taste”. My developer, Akshay Kolte, and I built a Facebook app called, Expressionality, that prompted users to create one playlist of their top 10 favorite songs of all time. We then showed them personality traits about themselves that we pulled from their song selections using ROVI Corp APIs. Each user could listen to any other user’s “top 10” to not only discover music, but also get a sense of that user’s personality. What we discovered was that the single top 10 playlist was too limiting, not engaging enough, and not dynamically representative of their taste. For example, someone’s favorite music for waking up on a cold winter’s morning, is different than when they’re making pancakes in the kitchen for their kids, which is different than when they’re getting ready to go out on Friday night.
From this discovery, the app began to evolve to what you see today at http://moodsnap.fm.

How did you do (and how are your doing) customer discovery?

There are great social media tools out there but at the end of the day they are just that – tools. Each company’s customer discovery method has to be in line with their brand and target the kind of people whose pain-points you’re aiming to solve, by offering interesting, entertaining, and unique content. To the affect, we primarily will be using inbound marketing techniques to create a palpable demand-pull from our target market.
Since at this time Moodsnap is targeted to and available for Spotify Premium Subscribers only, we have a number of tools that helps us identify who, where, and from whom these people turn to in order to hear about new things. Moodsnap is a free value-add for this self selected market who already value spending $9.99 a month for a premium on-demand streaming subscription, and we’re hoping that once they discover our app provides value for their life, they’ll share it with friends, increasing our viral quotient.
Since Moodsnap is such a visual experience, Instagram® and other photo sharing platforms are going to be huge tools for us to create engagement over the concept of a “Moodsnap”, and what makes a good “Moodsnap Moment”. We’ve been testing some fun ideas and we’ll soon be allowing people to submit their own photographs that they think would make a great Moodsnap station. That’s something a lot of our beta testers have wanted.
There’s also conversations happening at light speeds on Twitter about mood and activity based music discovery – we plan on developing a respected voice within those conversations.

What has been the biggest practical challenge with Lean Startup methodologies?

Creating an efficient and working project management structure among our virtual team of five has been challenging at times. When we started the project most of us were based in the same city and could iterate rapidly, but as people’s lives took on different demands and we became more of a virtual team, it took some time to define a system regarding sprints, deadlines, discussions, implementation, testing, and prioritization that kept things from falling through the cracks. Not everyone has the luxury of a product manager during the development stage so having Matt Green on the team helped us a lot. We’re all looking forward to the time when it makes sense to rejoin under one roof and start to scale the business.

What’s the best piece of advice you were given or wish you had been given about starting a business?

Rather than give one piece of advice I’ll paint a holistic picture that combines my experience as a third-time company founder, with what I’ve learned from a personal mentor and professor at the Olin Graduate School of Business at Babson College, JB Kassarjian.
Be real. Be present. Be curious. Be reliable. Be mindful. Be brave. Take value in speaking up when something is wrong. Shed the psychic baggage of yesterday. Commitment comes from realness – from gut feelings of right or wrong, passion or dispassion. Truly listen to others, consider other opinions, but at the end of the day have faith in your instincts and believe in what you commit to. Consensus on the other hand, is about cutting OUT risks, doing what is safe for everyone. As a result you get the lowest common denominator as output. Cut through minutia: focus on the three most important problems and deal with it directly at the source. The notion of empowering others is nonsense. Empowerment in business requires “stretch” before a person can FEEL empowered. You feel it after you stretch yourself past your comfort zone, boundaries, or perceived capability limits.
Don’t be afraid to ask for help. Check your ego at the door and allow yourself to be vulnerable. People respect that realness and only then can you be truly present and absorbent of the situation at hand. Think before acting – don’t be reactionary to high impact emotional situations. Maintain a strong internal locus of control. Strategy is choice, for your company and you. If you don’t know where you are going, any road will take you there. It’s very easy to make things complex, very hard to make them simple – strive for simplicity.
Lastly, embrace risk, because in the end if there isn’t something you are willing to risk or fight for, is what you’re doing worth it?

How can we get Moodsnap?

Download Moodsnap for free from the iTunes App Store on Tuesday September 17th, or visit http://moodsnap.fm. Currently, you need to be a Spotify Premium Subscriber to use the app. 30 Day Free trials are available here https://www.spotify.com/us/freetrial/.

Have fun and reach out to us anytime at hello(at)moodsnap.fm