A little background on LSM events

David Alfaro and I have had a great weekend here at Lean Startup Machine San Francisco, as part of our LeanStartupConf tour of the area. For those not aware, LSM events start on Friday night, teams form around business ideas, and over the course of the weekend you use the Validation Board model to explore assumptions behind your business idea and actually build experiments to test those assumptions with real customers.

It’s a great event, with a competition at the end to see which team made the most impressive pivots in their idea and most effectively used the process.

Our team worked on a cool idea brought by Stephen Benjamin. On Friday night Stephen pitched the idea that businesses could send their documents to Nativize.me where it would be translated by a native speaker from the appropriate country. So we started with that idea, but because of the constraints of a weekend event, we decided to focus on non-native English speaking students at US Universities. 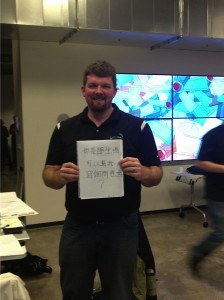 I’m holding a sign in Chinese asking students to speak with me about our project. It worked!

So we “got out of the building” and interviewed foreign students we met at the City College of San Francisco. All of them cared about their English and actively were trying to improve. That was partly validating our concept, but we realized something crucial. Almost all of them were more concerned about their spoken English than written English. The fact is they already had a support network of people who could help them for free with written English.

Our next assumption was that people would pay for this. So we added price information to the landing page, and we set a minimum success criteria that we wanted a 15% conversion rate. We ran the ads overnight but only had a 12% conversion rate. That’s close, but it didn’t meet our criteria. So we invalidated the idea that enough people were willing to pay for the service. 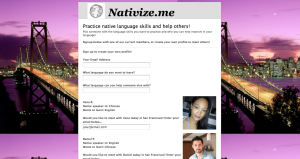 To test this assumption that people would be willing to do that, we built a simple form on Wufoo that looked like you could sign up to meet one of the specific individuals, as well as sign up to offer language tutoring to others.

We ran a short google ad group around this, and we got 2 signups on our form. We set a goal of getting at least one person to do that, and so we validated the assumption!

Our team learned a lot doing this, and I highly recommend the Lean Startup Machine events. Here’s a summary of a few things we learned.

The first way we tried to see if people would pay for this was to stand on street corners in San Francisco with signs offering to have people pay us to practice English with us. This failed, and no one offered to pay us. While disappointing, it led to some great discussions among our team. We decided to run some additional tests that worked better, but still didn’t meet our success criteria.

Even though we came close to the success criteria in the second test, we embraced the failure and still invalidated the assumption, and pivoted anyways.

Going outside and talking to people you’ve never met takes some guts. But it’s really important to take a risk of embarrassing yourself and try it anyways. You will learn so much that you don’t expect to – we certainly did.

In our first exploration phases of customer discovery, we talked to people in person and the conversation was very rich. We got to hear their passion, really understand their problems, and make an emotional connection with what interested them.

In our pitch phases of customer discovery, we were focused on setting up a few types of simple landing pages and looking at online click-throughs and conversion rates. This was very valuable and provided some interesting validations and invalidations. But it wasn’t as rich an experience, and we weren’t having the same conversations with people.

It’s worth the time

Lean Startup Machines are an investment in time and money. You’ll need to pay a little, or maybe travel somewhere as I did, but the real investment is your weekend. If you’re on the fence, let me push you over. It’s worth it.