Does your startup have a mobile application component?  You’re certainly not alone, and that app should be more than just a mobile-aware website.  That’s one thing that I heard repeated at the #MoDevTablet conference last Friday just outside Washington DC. 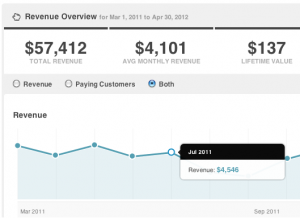 A screen shot from KISSmetrics. Notice how analytics makes you profitable. 🙂

Here are 3 other lessons you should consider for your mobile project:

Manuel Mattke from Hydra Insight gave a talk on product management skills that every entrepreneur should know, and his fifth one was “Measure and fix. Repeat.” That type of advice is solid and should not be a surprise to anyone following the lean startup movement. But how do you measure things in a mobile app? It’s not the same as web development. Manuel recommended using Mixpanel or Kissmetrics for tracking user patterns in the mobile app and learning from them. I also met the app47 team at the conference – their developer edition also provides built in analytics to your app.

2. Tablets and Smartphones are not the same

Is your app intended for smartphone use or tablet use? Or both? Consider this distinction carefully. There were a lot of mobile frameworks on display at the conference (such as Appcelerator, PhoneGap, Enyo, and more). Any of these frameworks will help you produce apps that run well on both iOS and Android devices, including different screen sizes. But producing an app that works well on both smartphone and tablets is not just about code that ports easily, it’s also about design and UX. You have a lot more real estate to play with on a tablet, and I heard one speaker admit that they sometimes had a hard time filling that space up. Consider how your app can provide a richer experience when run on a tablet.

3. Want to be profitable? Give your app away for free!

It sounds a little bit backwards, but free apps were definitely the consensus of multiple speakers at MoDevTablet, including Todd Moore, author of “Tap, Move, Shake: Turning your game ideas into iPhone & iPad apps”.

Many of the speakers recommended you will make more profitable apps with one of these options:

Todd talked about still having paid versions of apps too, but those should probably not have in-app purchases.  Pick one model or the other, but trying both doesn’t work well in his experience.

A few other tidbits

There were a lot of other tidbits that I heard from various speakers, and I’ll just regurgitate a few more here.  Not all context is provided, so take these with a grain of salt: