Another reason to nearshore in Costa Rica 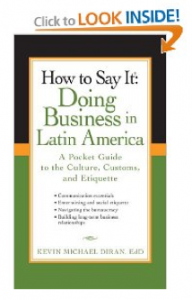 The finer points of bribing, and why you don’t need to worry about it

Doing business in another country can be very exciting, but also comes with a set of challenges. What is culturally or even ethically acceptable in one country is not always the case in another.

In the United States, it is virtually unimaginable that you would have to pay a bribe to someone in order to conduct a simple business transaction. But in many parts of Latin America it is very common.

I’ve been reading a book called Doing Business in Latin America, by Kevin Michael Diran, and one of the more interesting parts to me so far has been on the nuances of bribing someone.

Fortunately bribing is not something you need to worry about as much in Costa Rica, which is why I say it’s a good choice for nearshoring.

The 3 types of Bribes

In fact, there are three different types of “bribes” that the author describes. I put bribe in quotes there because it is a harsh term perhaps for the lowest level, but nonetheless these are things that most norteamericanos are not going to be used to.

The lowest level are called propinas. This could be simply a tip for your waiter, but is also commonly given to someone in advance for helping you with a particular service. As an example, the author describes the unofficial parking attendants that I frequently saw in Costa Rica who will help direct you into a parking spot, whether you need the help or not, and then expect you to tip them. Since there are a lot of vehicle break-ins in Costa Rica, I think of this not so much as a bribe but as a “thank you in advance” for watching my car and keeping it safe.

The next two levels are more foreign to North Americans, and I personally have yet to witness them in Costa Rica. Refrescos are small bribes (in the $5 to $20 range according to Diran), and these would be used if a police officer is about to give you a ticket, to speed up the process at the bank, or if you are trying to get into a busy restaurant. While I can imagine being very annoyed at needing to grease the skids with a refresco, Diran’s book advises that this is just the way business is done in many places and you need to deal with it.

The largest kind of bribe is the one I would worry the most about as a businessman working in Latin America. A mordida is a large bribe in order to make a business contract happen, which the author describes as often being a kickback valued at 2 or 3 percent of the contract value. It might be cash, or some sort of in-kind gift to the person authorizing the contract. People don’t typically ask for a mordida outright (or so I’m told), they hint at it. Personally, I have no idea how to even recognize the signals that someone is asking for a mordida, and I would be very nervous trying to offer one. Did I offer the right amount? Was I subtle enough? Am I giving it to the right person? Will this even get me the contract? Is this illegal? Should I even be doing this?

Fortunately, I don’t have to worry about these things as much in Costa Rica, and neither do AgilityFeat’s clients. I’m not saying they don’t ever happen, I’m just saying I have not seen it yet and the way that we have our development teams set up in Costa Rica I don’t expect to ever have to deal with it (unless I get pulled over for speeding I suppose).

And this book I keep mentioning backs me up on this too. Diran quotes Transparency International’s “Corruption Perception Index” for Latin America. Of 21 countries listed, Costa Rica is 2nd place for being the least corrupt. Only Chile gets the higher ranking.

What this means for nearshoring your software project

When I explain Nearshoring in Latin America to potential clients, they immediately get the value of the lower costs in the same time zones as the US. Next they almost always ask “Ok, but why Costa Rica?” One of my answers is that Costa Ricans have a much higher cultural affinity with the United States than other Latin American countries.

That means a lot of things – for instance, I’ve never been pejoratively called a gringo, and there are much less negative feelings about the United States. It also means that we share more similar cultural traits – one of which is not worrying about bribes.