As mentioned in a previous post, we played a game last night at AgileCville’s meeting last night that was fun and definitely kept the conversation going. We had some very good discussions around a number of agile topics, and so that itself is the strongest indication that the game had the desired effect. 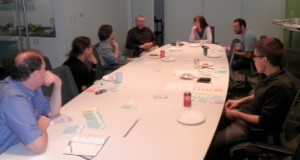 Prior to the meeting, I made up three kinds of playing cards. The first group were 40 failure patterns. Each failure pattern was a mailing label with a phrase on it like “Long Standups”, or “Silo’d teams”, or “We don’t do retrospectives because XYZ”. I kept the failure patterns as short phrases so that the players could interpret them to mean whatever they wish. Some that I included in my list are debatable if they are really a failure pattern or not, but I included them intentionally to spark debate. I printed the mailing labels and they all went on red or yellow index cards (note to self, I should have only used one index card color to reduce confusion, but I didn’t have enough of any one color).

The second group of cards were “Remedies.” These mailing labels were all printed on blue or green index cards (again, I didn’t have enough of just one color). These labels all contained an agile practice or value, such as “Pair Programming”, “Better facilitation”, “Working software over comprehensive documentation”, etc.

Finally, I included eight purple index cards, which were our wild cards. Atlassian (makers of Jira, Confluence, and Greenhopper) was kind enough to sponsor the pizza for our meeting, so I included their logo on the wild cards. Thank you very much Atlassian!

You can download my labels here (Word or PDF, setup for Avery 8160 labels) if you want to use them as a starting point.

Now, on to the rules of the game….

With seven of us in the room, we went around the table twice in 75 minutes, and that seemed like a good length for the game. We had some excellent discussions on agile adoption and typical problems people have encountered with their teams.

For a twist in the second round of play, we tried introducing poker chips into the game. Each person got 8 chips and 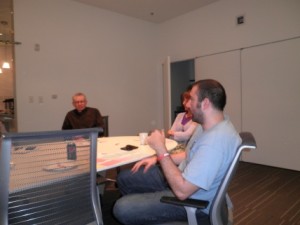 we considered using them as ways to indicate “+1” to other player’s comments. We also experimented a little bit with using the chips to “bet” when making your comment and have the other players determine the best remedy and give all the chips bet on that pattern to the winner. I would say that neither technique for poker chips really caught on, but I encourage you to try your own ideas. If you have some sort of prize, giveaway then chips might be more useful.

Regardless of how you play it, have fun and let me know if you find this idea a useful way to spark discussion throughout a group!