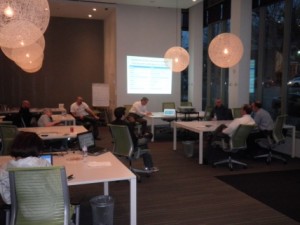 Tonight at the AgileCville user group meeting, we discussed Scrum in Schools.  This was a roundtable discussion of group members, and it was very interesting.  Paul Erb kicked off the discussion for us.  Paul is an Agile Cville regular, as well as the business manager at Tandem Friends School in Charlottesville.  Paul considers agile more of a social mechanism then strictly a software development process, and so his core question is “what if schools were agile?”

At least half the attendees had done some form of teaching.  Delia is a former English school teacher turned web designer, John teaches personal finance in addition to being a software consultant, Larry uses agile practices with student groups he helps teach, and then others in the group (such as myself) have taught courses here and there.  I hadn’t really thought about it before, but I was impressed with the number of education-minded techies there, and I know Paul was pleased with the level of interest the topic generated.

Paul started out with a few slides that kicked off our discussion, and that led into a free form discussion for over an hour.  I liked Paul’s slide showing how he would structure the school day.  Essentially he would setup half the day for “traditional” teacher lectures, and half the day where students would participate in scrums and work on specific problems or self driven activities to reinforce the learning.  The lecture part of the day would still be agile however, since feedback from the previous day’s scrums would be incorporated into what topics the students needed extra instruction on.

Paul’s emphasis was largely on how scrum would help facilitate “problem based learning”.  Most people learn better when they are applying concepts to solve a problem, then just memorizing those concepts.  These problems could be real problems supplied by businesses, or the attendees also discussed possibly having a backlog of student generated ideas that scrums could choose from.

Grades and standardized tests should be de-emphasized, and “the definition of done” becomes more important, just like the real world.  Students keep iterating on a problem until they get it “right”, or complete the problem.

One thing Paul said that I particularly liked was “There is one 21st century skill:  collaboration.”  By incorporating agile practices into education and teaching students how to collaborate and problem solve better than traditional education does, we would be empowering them to become much more effective in their careers.

That’s by no means a comprehensive list of best practices, and it will be interesting to see where this goes.  There are a number of other groups on the web also exploring these ideas, so for more information you may want to check out:

Thanks to all who attended AgileCville this month!  This was my first month as the group’s scrummaster, and I really enjoyed it.  I look forward to facilitating meetings for the next six month rotation.  Our next meeting will be Tuesday April 19th, at OpenSpace in Charlottesville, from 6-8pm.  The topic is yet to be decided for sure, but you can join the google mailing list to get involved!